A LITTLE ABOUT ME... 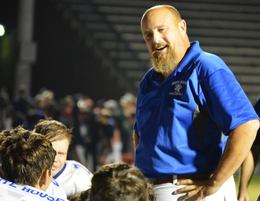 Greetings, students and parents.  My name is Mr. William Lowe, and I will be your child's 8th grade Math teacher for the 2021-2022 school year.  This is my 24th year of classroom teaching in the state of Tennessee.  In 1998, I began my career teaching Special Education in inner-city Metropolitan Nashville schools at Jere Baxter Middle School.  I have taught in White House, Tennessee since 1999 including White House Elementary (Robertson County, before the counties' school-system agreement split), White House Middle School in 2001 (when WHMS was at the current high school annex building), H.B. Williams Elementary School when it opened in the Fall of 2002, and back to White House Middle School with the movement of 5th grade to the middle school in 2006 to the present.  I have lived here in White House since 1999 as well.

My higher educational path started in 1985 and went through Western Kentucky University where I earned my A.S. in General Study while also working several route sales jobs.  Also, in 1987, I enlisted in the U.S. Army National Guard where I served from 1987 to 1993 as a combat medic.  I continued to work in sales, but returned to school at Tennessee State University and graduated with my B.S. in Special Education in 1998.  I continued my education at Middle Tennessee State University to add my general education endorsement in 2002, and have taught in the general education classroom since then from grade 5 to 8 in all subjects.  I coached football here at White House Middle School for 9 years, and with the community Jr. Pro program for 7 years, but hung up my whistle to focus on my two children's last few years at home and college.

I have two children; my daughter Dexter is 25, and my son Miller is 21.  Dexter is a graduate of WHHS and Tennessee Tech University, earning a bachelor's degree in music education (vocal).  My son, Miller, graduated from WHHS and is a senior at the University of Tennessee at Knoxville majoring in Civil Engineering.  We have two cats named Tubby and Big Fuzzy, and a terrier/dachshund mixed dog named Stretch.

I am a lover of classic rock and country music, playing guitar, attending concerts, working on and driving my old classic cars, deep-sea fishing, U.S. History, freedom, The U.S. Constitution, cooking, grilling, and smoking lots of meats for all to enjoy!  I work hard, and I play hard.  I want the same for your child so he/she can be proud of him/herself in the future.

If you have any questions or concerns, please do not hesitate to email me.

MY FAMILY AND MY HOBBIES
Powered by